After the tremendous  success of E.T. THE EXTRA TERRESTRIAL (1982), director Steven Spielberg and screenwriter Melissa Mathison wrote a treatment for a possible sequel. E.T. II: NOCTURNAL FEARS picks up  several months after the events of the  first film. A lonely Elliot is still dealing with the  departure of his little alien buddy, his parents divorce finalized, and mom and Dr. Keys are romantically involved.  This quiet solitude is interrupted by evil aliens arriving on a second ship.

“The aliens onboard are EVIL. They have landed on Earth in response to distress signals designating its present coordinates. These aliens are searching for a stranded extraterrestrial named Zrek, who is sending a call for ‘Help.’ The evil creatures are carnivorous. Their leader, Korel, commands his crew to disperse into the forest to acquire food. As the squat aliens leave the gangplank, each one emits a hypnotic hum which has a paralyzing effect on the surrounding wildlife. These creatures are an albino fraction (mutation) of the same civilization E.T. belongs to. The two separate groups have been at war for decades!”

Elliot and the gang are kidnapped and violently interrogated by the evil aliens, demanding to know the whereabouts of E.T. (aka  Zrek ) who arrives in the nick of time to rescues his  earthling friends.

The darker tone of this treatment would of severely damaged the family-friendly story of the original film. It’s interesting to see Spielberg explore more horrific themes as he did in the mid-80’s. Films like INDIANA JONES AND THE TEMPLE OF DOOM and GREMLINS had severe graphic turns in otherwise Disney-like adventures.  Spielberg decided against pursuing the sequel, feeling it “would do nothing but rob the original of its virginity.”

In 1985, the novel “E.T. The Book of the Green Planet” by William Kotzwinkle returns to the aliens home planet where they are the supreme masters of all living things. E.T. retains Gertie’s geranium and

Now, at last, we see where E.T. comes from — who he really is and what his own distant world is like. Return with him to the Green Planet, whose inhabitants are the supreme masters of all growing things in the galaxy. Wander through their immense enchanted gardens, to which E.T. has returned, with Gertie’s geranium, a love for all things on  Earth while Elliot hit puberty back home and struggles with his feelings for a girl.

Although there have been countless rumors of an E.T. sequel for the past 3+ decades, these two are the only projects officially developed.

The Short Story of It’s A Wonderful Life sequel 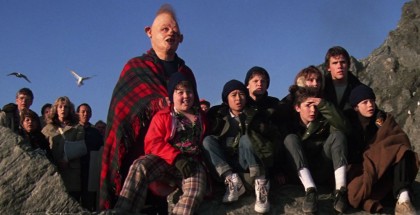