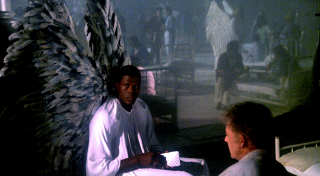 THE EXORCIST III (1990) - One of the oddest movie credits ....Patrick Ewing as the Angel of Death'. There's a Knicks joke in there somewhere. © 20th Century Fox 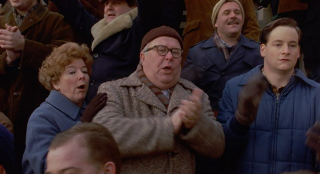 RUDY (1993) is an account of the life of Daniel "Rudy" Ruettiger, who harbored dreams of playing football at the University of Notre Dame despite significant obstacles. The actual Rudy Ruettiger can be briefly caught in the stands, in the row behind and just to the left of Ned Beatty at the final game of the 1975 season. It was the first movie that the Notre Dame administration allowed to be shot on campus since KNUTE ROCKE, ALL AMERICAN (1940). © TriStar Pictures 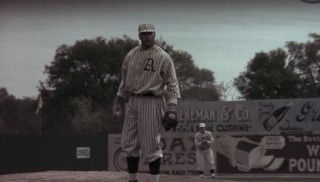 Roger Clemens as an unidentified Philadelphia A's opposing pitcher to Tommy Lee Jones' Ty Cobb in the 1994 film COBB. Cobb hit a double off him after Clemens tried to hit him in the head (just like the real Roger!) When Cobb made it to second, Clemens tells Cobb "I hear your from Georgia, where the men are men and the sheep are nervous." © Warner Bros. 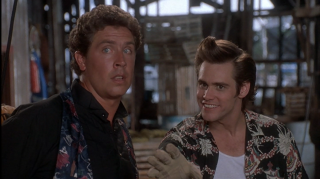 Miami Dolphin quarterback and future Hall of Famer Dan Marino as himself, being rescued by Jim Carrey after being kidnapped in ACE VENTURA: PET DETECTIVE (1994) © Warner Bros. 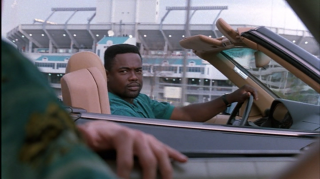 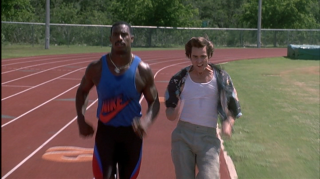 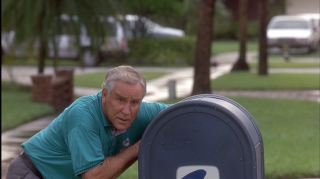 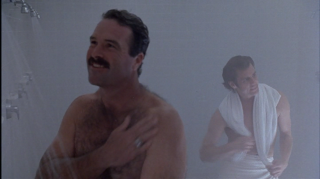 Although he was retired from the NFL for 9 years by the time ACE VENTURA: PET DETECTIVE (1994) came out, longtime Miami Dolphin linebacker Kim Bokamper can be spotted sharing a shower with Jim Carrey. © Warner Bros. 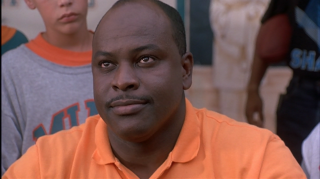 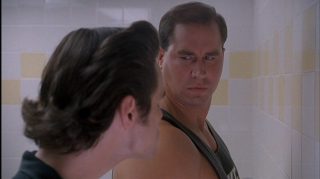 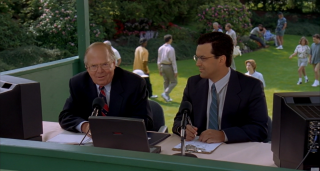 Verne Lundquist as himself in HAPPY GILMORE (1996).Lundquist is a longtime announcer, currently with CBS Sports. Lundquist was commentator for sport show, "Bowling for Dollars", in Dallas, Texas in the early 70's. During this period, Lundquist starting interviewing Dallas Cowboys players and their first head coach, Tom Landry, at their sidelines, during halftimes, practices, pre-season and pre-game warm-ups, in Dallas. Lundquist currently does play-by-play for CBS college football (teaming with Gary Danielson on the network's broadcast of Southeastern Conference games) and college basketball action, as well as The Masters and PGA Championship golf tournaments. © Universal Pictures 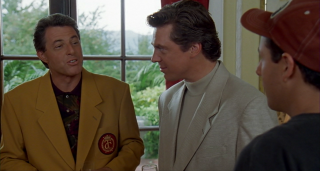 In HAPPY GILMORE (1996), Mark Lye appears as himself in one scene with Happy and Shooter. Lye joined the PGA Tour in 1977, he made the cut in 332 of 486 career starts in PGA Tour events in an 18-year career, which included 41 top-10 finishes. His lone victory in an official PGA Tour event came in 1983 at the Bank of Boston Classic. In that tournament, he came from 8 strokes down on the final day including birdies on three of the last four holes for a round of 64 to earn a one-stroke victory over John Mahaffey, Jim Thorpe and Sammy Rachels. © Universal Pictures 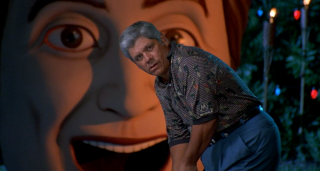 Lee Trevino as Himself going through a round of miniature golf in one of five scenes in HAPPY GILMORE (1996). Trevino usually expressed disbelief at something that has happening. He only has one line in the whole film, letting Shooter know that Grizzly Adams had a beard. © Universal Pictures 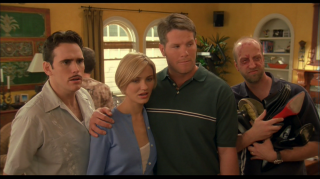 There's Something About Mary

Brett Favre (without a cellphone) as himself, Mary′s former love interest in THERE'S SOMETHING ABOUT MARY (1998). © 20th Century Fox

Barely recognizable through the rain is Warren Moon in ANY GIVEN SUNDAY (1999). Moon is a former American professional gridiron football quarterback who played for the Canadian Football League's Edmonton Eskimos and the National Football League's Houston Oilers, Minnesota Vikings, Seattle Seahawks and Kansas City Chiefs. He is currently a broadcaster for the Seattle Seahawks. © Warner Bros.

Terrell Owens scores a touchdown in the final playoff game in ANY GIVEN SUNDAY (1999). A six-time Pro Bowl selection, Owens holds or shares several National Football League records, and features in the all-time top-five in several receiving categories, including yards and touchdowns. © Warner Bros.

Bob St. Clair as the Minnesota Head Coach in the first game in ANY GIVEN SUNDAY (1999). St. Clair is a former San Francisco American football player known for fine play and eating raw beef. Because of his eccentricities, his teammates nicknamed him "The Geek". © Warner Bros.

Dick Butkus as an opposing coach and Pat Toomay, who wrote the novel for ANY GIVEN SUNDAY (1999). © Warner Bros.

The great Johnny Unitas as the Knights Head Coach in ANY GIVEN SUNDAY (1999). Unitas was a pro American football player in the 1950s through the 1970s, spending the majority of his career with the Baltimore Colts. He was a record-setting quarterback, and the National Football League's most valuable player in 1959, 1964 and 1967. His record of throwing a touchdown pass in 47 consecutive games (between 1956–1960) remains unsurpassed as of 2011. © Warner Bros.

Y.A. Tittle in some very brief screen time in ANY GIVEN SUNDAY (1999). Tittle, is a former football quarterback in the NFL & All-America Football Conference who played for the Baltimore Colts, San Francisco 49ers, and the New York Giants. He was inducted into the Pro Football Hall of Fame in 1971. © Warner Bros. 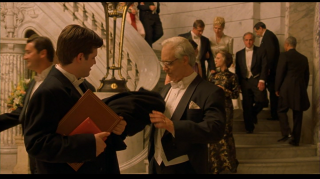 This is more for New York sports fans. In A BEAUTIFUL MIND (2001), check out the guy walking down the stairs; its long time New York-based sportscaster Warner Wolf. If you watch the entire scene, you can tell Wolf is having a hard time not looking directly into the camera. © Universal Pictures

Lance Armstrong gives a pep talk to Peter "Pete" LaFleur (Vince Vaughn) in DODGEBALL: A TRUE UNDERDOG STORY (2004). Armstrong reveals to LeFleur that he is a big fan of the Dodgeball tournament currently showing on the fictitious ESPN 8, "Yeah, I've been watching the dodgeball tournament on the Ocho. ESPN 8. I just can't get enough of it!" © 20th Century Fox

In THE INCREDIBLE HULK (2008) Rickson Gracie has a small role as Bruce Banner's martial arts instructor, despite his Brazilian Jiu-Jitsu background, he is credited as an Aikido instructor.Gracie is a Brazilian 8th degree black and red belt in Brazilian Jiu-Jitsu and a retired mixed martial artist. He is also a member of the Gracie family, a prominent sporting family from Brazil known for their founding of Brazilian Jiu-Jitsu (BJJ). They have been successful in combat sport competitions including mixed martial arts, vale tudo and submission wrestling events. As a family, they uphold the Gracie challenge, which promotes their style of BJJ. The Gracie family line in Brazil descended from George Gracie, a Scotsman from Dumfriesshire who immigrated in 1826 when he was 25 years old. © Universal Pictures

In THE FIGHTER (2010) Mark Wahlberg gets congratulations from "himself", former Welter-weight champion Micky Ward. The guy on the right is Chuck Zito, amateur boxer, martial artist, celebrity bodyguard, stuntman, former boxing trainer and former president of the New York chapter of the Hells Angels, but best remembered as the guy who punched out Jean Claude Van Damme in a bar. © Paramount Pictures

Terry Crews as the boot camp instructor in BRIDESMAIDS (2011). Crews was drafted by the Los Angeles Rams of the NFL in the 11th round of the 1991 NFL Draft. He played for seven seasons, including stints with the Rams, San Diego Chargers, the Washington Redskins and the Philadelphia Eagles. © Universal Pictures 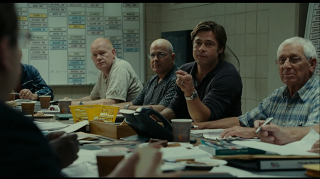 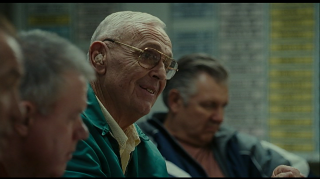 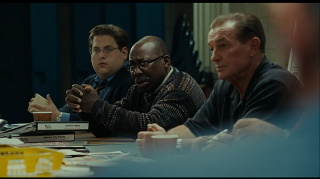 Ian Laperrière & R. Matt Carle of the Philadelphia Flyers as themselves in THIS IS 40 (2012) © Universal Pictures

Scott Wesley Hartnell & James F. Van Riemsdyk of the Philadelphia Flyers as themselves in THIS IS 40 (2012) © Universal Pictures