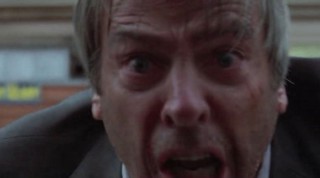 Invasion of the Body Snatchers

Kevin McCarthy is still screaming about aliens coming to take you away in the INVASION OF THE BODY SNATCHERS remake (1978). © United Artists

In SUPERMAN: THE MOVIE (1978), Kirk Alyn and Noel Neill have cameo appearances as Lois Lane's father and mother. Alyn and Neill portrayed Superman and Lois Lane in the film serials SUPERMAN (1948) and ATOM MAN VS. SUPERMAN (1950). Neil continued her role in the 1950s ADVENTURES OF SUPERMAN TV series, and also appeared as Lex Luthor's elderly wife in the opening scene of the film SUPERMAN RETURNS (2006). © Warner Bros. Pictures

Smokey and the Bandit Part 3

Burt Reynolds briefly reprises his role as The Bandit in SMOKEY AND THE BANDIT PART 3 (1983). The film was originally entitled SMOKEY IS THE BANDIT, with Jackie Gleason playing both Sheriff Buford T. Justice and the Bandit. According to the legend, test audiences reacted poorly, finding Gleason's two roles confusing, and so the Bandit scenes were re-shot with Jerry Reed playing the role. At the end of the film, Buford finds Cledus and begins to apprehend him, but Buford then imagines Cledus to be the "Real" Bandit (Reynolds cameo appearance) who sweet talks him to letting him go and starting a new pursuit. © Universal Pictures 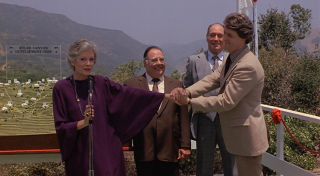 AGAINST ALL ODDS (1984) is a neo-noir 1984 remake of OUT OF THE PAST (1947) starring Jeff Bridges, Rachael Ward and James Woods. Two of the original stars of the 1947 film have small roles in the remake. Jane Greer plays Rachel Ward's mother and Paul Valentine, who played hood Joe Stephanos in the first film, played the councilman in the grey suit. © Columbia Pictures 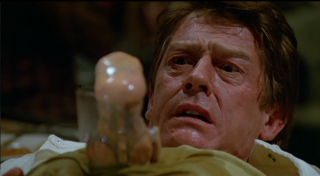 "Oh No!, Not Again!" John Hurt briefly "reprises" his role of Kane from the original ALIEN in the Mel Brooks Sci-Fi spoof SPACEBALLS (1987). He unfortunately had the special in the Space truck stop, which led to a strangely familiar Alien to pop out of his stomach (again), only this time the little creature morphs into a Michigan J Frog clone, singing "Hello My Baby" before scurrying off down the lunch counter. © Metro-Goldwyn-Mayer 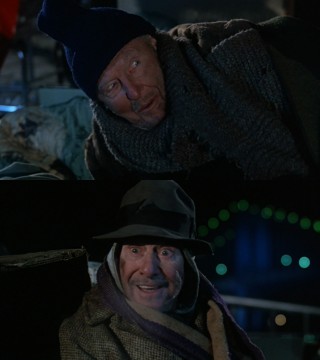 In COMING TO AMERICA (1988), Ralph Bellamy and Don Ameche reprise their roles as, respectively, Randolph & Mortimer Duke from John Landis' 1983 Eddie Murphy-starring comedy film TRADING PLACES. A segment of the Trading Places score can be heard during their scene. What is interesting to note, the two actors never appear in the same frame with each other, leaving some to believe they filmed their parts separately. © Paramount Pictures

Gregory Peck appears briefly in the 1991 remake of CAPE FEAR as Max Cady's (Robert DeNiro) defense attorney Lee Heller. He was in the original 1962 classic as Sam Bowden, which was played by Nick Nolte in the remake. © Universal Pictures

Martin Balsam as the judge in the 1991 remake of CAPE FEAR. Balsam was in the original 1962 film as Police Chief Mark Dutton. © Universal Pictures

Robert Mitchum as Lieutenant Elgart in the 1991 remake of CAPE FEAR. Mitchum was in the original 1962 film as Max Cady, the role Robert DeNiro plays in the remake. © Universal Pictures 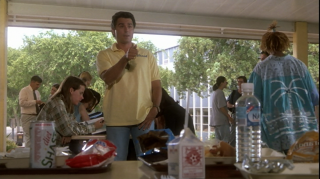 In THE BRADY BUNCH MOVIE (1995), Christopher Knight, the original Peter, plays a coach who stops two boys from bullying the film's Peter in a cafeteria scene. © Paramount Pictures 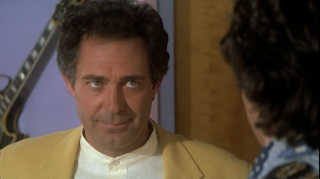 Barry Williams, the original Greg, plays a record producer who rejects the film's Greg's attempts to sell his song in THE BRADY BUNCH MOVIE (1995) © Paramount Pictures 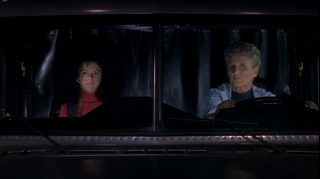 Stepping briefly out of retirement, Ann B. Davis, the original Alice, plays a trucker in THE BRADY BUNCH MOVIE (1995). Her character's name, Schultzy, was a reference to her most famous role prior to The Brady Bunch, that of Charmaine "Schultzy" Schultz, on The Bob Cummings Show. © Paramount Pictures

Planet of the Apes

"Those damn dirty humans!" Charlton Heston, who portrayed the lead role in the original film, makes a cameo appearance as Thade's (Tim Roth) father in PLANET OF THE APES (2001). Roth admitted he was "not comfortable" appearing opposite Heston, then president of the National Rifle Association. "I come from the exact opposite end of the political spectrum. Burton had to persuade me to do it. Finally, I decided that it was okay because it's fiction." Heston had no problem with his brief scene even though it highlights the perceived violent nature of firearms, says producer Richard D. Zanuck. "I was apprehensive when we wrote the scene and sent it to him. We didn't hear back from him for a while. Finally, I called him up and asked him what he thought of the lines. He said, 'Oh yeah, I think they're wonderful.' I thought, 'Oh, thank God, we got away with the gun'." © 20th Century Fox

In SUPERMAN RETURNS (2006), Jack Larson, who portrayed Jimmy Olsen in the 1950s television series ADVENTURES OF SUPERMAN, makes a cameo appearance as a bartender along with Jimmy Olsen (Sam Huntington) © Warner Bros. Pictures

In THE INCREDIBLE HULK (2008), the late Bill Bixby appears in a scene from his TV comedy-drama The Courtship of Eddie's Father, which Bruce Banner is watching at the beginning of the film. © Universal Pictures

Original Hulk actor from the 1970's TV series, Lou Ferrigno has a cameo in THE INCREDIBLE HULK (2008) as a security guard who is bribed by Banner with a pizza. Ferrigno also supplied the voice of the Hulk. This marks the third time Ferrigno portrayed the Hulk, having also voiced the character in the 1996 animated series. Originally, the Hulk's only line was "Betty" at the film's ending, which would have been his first word. The director was aware that fans wanted him to speak normally, and added "leave me alone" and "Hulk smash!" The latter line received cheers during a screening he attended. © Universal Pictures

In X-MEN: FIRST CLASS (2011), Hugh Jackman reprises his role as James "Logan" Howlett / Wolverine in an uncredited cameo in a bar, dismissing an approach by Xavier and Lensherr to join them. Jackman said he accepted the offer to appear because "it sounded perfect to me", particularly for Wolverine being the only character with a swear word. The cameo took about eight takes during a two-hour shoot on the Fox Studios lot in Los Angeles and the actor changed his line in an ad-lib from "fuck off" to "go fuck yourself" © 20th Century Fox

Just like Hugh Jackman as Logan/Wolverine, Rebecca Romijn makes a cameo appearance as well in X-MEN: FIRST CLASS (2011), The model turned actress played Mystique in the previous X-MEN movies. In the 2011 prequel, she was portrayed by Jennifer Lawrence. However, in a scene with Erik Lehnsherr (before he became Magneto), Rebecca Romijn appears as the “older” Raven and the blue Mystique we came to know in the previous movies when she was told by Erik he prefers the “older and true” Raven. © 20th Century Fox

Ving Rhames very briefly reappears in a uncredited cameo as Luther Stickell, Etan Hunt's colleague at the end of MISSION IMPOSSIBLE: GHOST PROTOCOL (2011). Rhames character has the distinction of appearing in all four MISSION IMPOSSIBLE films along with Tom Crusie. It has been reported that he received $7.7 million for his 3 minutes of screen time, but that maybe due to his contract stipulating a minimum salary when appearing in the 4th film © Paramount Pictures

An uncredited Johnny Depp returns to the role that launched his career, Tom Hanson in 21 JUMP STREET (2012) © Columbia Pictures © MGM

Meredith Salenger, the star of Disney's 1985 adventure THE JOURNEY OF NATTY GANN has a cameo as a TV reporter named "Natalie Gann" in the RACE TO WITCH MOUNTAIN (2009) © Walt Disney Studios Motion Pictures

Kim Richards who portrayed Tia in the original WITCH MOUTAIN films of the 1970s, made a cameo appearances in RACE TO WITCH MOUTAIN (2009) as a roadhouse waitress (named "Tina," a minor change from the character [Tia] she played in the 1975 and 1978 films). © Walt Disney Studios Motion Pictures