Stan Lee is the legendary comic book writer and editor that in collaboration with several artists, including Jack Kirby and Steve Ditko, co-create many of the most memorable superheroes over the past 50+ years for Marvel Comics. Lee’s creations include Spider-Man, the Hulk, Iron Man, Thor, the X-Men, the Fantastic Four, Doctor Strange and many others that lived in a shared universe. Lee and Kirby also resurrected older characters including Captain America and the Sub-Mariner as well as assembling the Avengers team of superheroes. 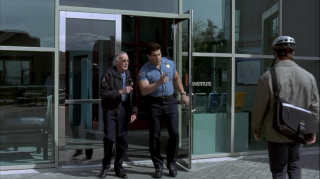 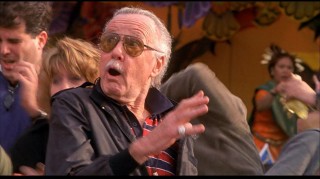 Spider-Man co-creator Stan Lee had two cameos in SPIDERMAN (2002), but one was cut. In the deleted one, he asks Peter, "Hey kid, would you like a pair of these glasses? They're the kind they wore in X-Men." Lee only briefly appears in the film to grab a young girl from falling debris during the battle between Spider-Man and the Green Goblin in Times Square. Interesting observation: the shirt Lee is wearing is Spiderman's blue & red.© Sony Pictures

Chances are if you watch a film based on a Marvel comic book character, you will catch Stan Lee in a cameo. Here he is in a few seconds of screen time just before he saves a girl from falling debris during a battle between Spiderman and Dr. Otto Octavius in SPIDERMAN 2 (2004). Stan Lee created Spiderman over 50 years ago © Sony Pictures

Spider-Man co-creator Stan Lee has a cameo in SPIDERMAN 3 (2007), as he did in the previous Spider-Man films, which he referred to as his "best cameo". © Sony Pictures

In CAPTAIN AMERICA: THE FIRST AVENGER (2011), Stan Lee is a U.S General a bit surprised at the height of the super hero. © Marvel Entertainment

In THOR (2011), Stan Lee attempts to remove the mysterious sledge hammer from outer space with his pickup truck. ©Marvel Entertainment

Hulk co-creator Stan Lee cameos as a man who becomes ill when drinking the soda poisoned by Banner's blood in THE INCREDIBLE HULK (2008). © Marvel Entertainment 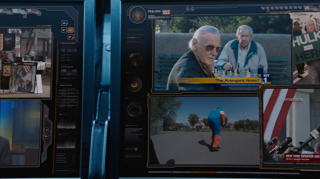 Comic writer extraordinaire Stan Lee appears briefly at the end of THE AVENGERS (2012) during the celebration montage, delivering the line "Superheroes in New York? Give me a break." © Marvel Entertainment

Spiderman creator Stan Lee plays a librarian listening to music on his headphones while stamping books, oblivious to the ongoing battle between Spiderman & The Lizard in THE AMAZING SPIDER-MAN (2012) © Sony Pictures

Thor co-creator Stan Lee makes a cameo appearance in THOR: THE DARK WORLD (2013) as a patient in a mental ward looking for his shoes. © Marvel Entertainment

"Hey, I know that guy!" Stan Lee "reprises" his role at the Librarian in THE AMAZING SPIDER-MAN 2 (2014) during the high school graduation ceremony. ©Sony Pictures