Raiders of the Lost Ark

In STRIPES (1981), you have to look very carefully to catch an unknown Bill Paxton, to the right of John Candy, as one of the "go-getters" of Bill Murray's last minute drill presentation. © Columbia Pictures

The 1981 slasher-at-summer-camp film THE BURNING had some interesting debuts. This is the film that launched the careers of Miramax founders Harvey and Bob Weinstein (their mother Miriam Weinstein is credited as a pre-production assistant on the film). Here is Jason Alexander in his first film role as Dave. © Miramax

Holly Hunter in her first film as Sophie in THE HUNTING (1981). Hunter later won the Academy Award for Best Actress for THE PIANO. © Miramax

FAST TIMES AT RIDGEMONT HIGH (1982) is a film filled with stars getting their first break, but there are some that can easily be overlooked. Here is Eric Stoltz and Anthony Edwards as Jeff Spicoli's Stoner Bud's © Universal Studios

Another easily missed unknown actor cameo in FAST TIMES AT RIDGEMONT HIGH (1982) is Nicolas Coppola.To avoid the appearance of nepotism as the nephew of Francis Ford Coppola, he changed his name early in his career to Nicolas Cage, inspired in part by the Marvel Comics superhero Luke Cage. © Universal Studios

A pre-BAYWATCH Erika Eleniak as the pretty girl with the huge crush on Elliot in E.T. THE EXTRA TERRESTRIAL (1982). © Universal Pictures

Ladies and Gentlemen, the Fabulous Stains

In the first five minutes of the1982 cult film LADIES AND GENTLEMEN, THE FABULOUS STAINS, Diane Lane's character loses her job in a fast food restaurant. The guy that fires her is an unbilled Brent Spiner in his second ever movie role. Spiner is best known as the android Lieutenant Commander Data in the television series STAR TREK: THE NEXT GENERATION and four subsequent films. © Paramount Pictures

Willem Dafoe in a very early screen appearance in THE HUNGER (1983), a film directed by the late Tony Scott. © Metro-Goldwyn-Mayer

THE BIG CHILL (1983) was a film about a group of baby boomer college friends who reunite after 15 years due to the suicide of their friend Alex. Kevin Costner played the roll of Alex in flashback scenes, but all of his parts ended up on the cutting room floor. The only time you see Costner is when is body his being prepped at the funeral home, and that was limited to his hair getting brushed in the coffin. Director Lawrence Kasden has never shown anything more than still photographs from the location shoot. He has also refused to do any sort of "director's cut," saying that the version of the film as it has stood since 1983 is his director's cut and will not be augmented. Costner was a friend of director Lawrence Kasdan, who promised the actor a role in a future project. That became 1985's SILVERADO, Costner's breakout role © Columbia Pictures

"There's no basement in the Alamo!" Jan Hooks as the Alamo tour guide Tina, in PEE WEES BIG ADVENTURE (1985). Hooks was a fellow member of the Groundlings comedy troupe with Paul Reubens (Pee Wee), co-screenwriter Phil Hartman and John Paragon (Jambi the Genie from "The Pee Wee Herman Show"). Hooks went on to co-star in Saturday Night Live with Hartman. © Warner Bros.

"My best friend's sister's boyfriend's brother's girlfriend heard from this guy who knows this kid who's going with the girl who saw Ferris pass out at 31 Flavors last night. I guess it's pretty serious. " Kristy Swanson has the distinction of appearing in two John Hughes films in one year. Here she is as Simone Adamley in FERRIS BUELLER'S DAY OFF (1986). She was also a Duckette in PRETTY IN PINK. © Paramount Pictures

In the early eighties, Chris Elliott was best known as the guy who lived under the stairs on LATE NIGHT WITH DAVID LETTERMAN, but in the first Hannibal Lecter film MANHUNTER (1986), he played it totally straight. © De Laurentiis Entertainment Group

THE DEAD POOL (1988) is the fifth and final of the 'Dirty Harry' films. It's also the most embarrassing, with a plot about the negative influences of violent horror movies and hard rock music, which is represented with all the cutting-edge credibility of an episode of 'Dragnet'. An early casualty of the killer is a controversial rock singer named ... Johnny Squares. 'James' Carrey plays the unlucky Mr. Squares in his first non-comedic role, or, rather, his first unintentionally comedic role. Do NOT miss the scene from the schlock movie 'Hotel Satan' ('directed' by an embarrassed looking Liam Neeson), where Squares hammily lip-synchs 'Welcome to The Jungle' dressed as an evil priest in leather pants, while 'dancing' around a woman 'patient' in bed wearing a long flannel nightgown and a giant black afro wig. Found dead after a break on the movie (the afro'd woman's rotating head caught on fire) Mr. Squares was obviously done in by a combination of heroin, Planters Peanuts, and Twinings Tea. © Warner Bros.

In the final "Dirty Harry" film THE DEAD POOL (1988), investigating the Death Pool Murders is aggressive TV reporter (and Callahan's love interest) Samantha Walker, as lovely as she is hard-charging. She's played by Patricia Clarkson in her second movie role. © Warner Bros.

Future Oscar-winner Cuba Gooding Jr. getting his haircut by Eddie Murphy in one of his many roles in COMING TO AMERICA (1988). © Paramount Pictures

Born on the 4th of July

The answer to the age-old question: How many Baldwins can you fit into one movie...three,. Stephen, William and Daniel all appear briefly in BORN ON THE FORTH OF JULY (1989). The Baldwins grew up in Massapequa, Long Island, the same town Ron Kovic (played by Tom Cruise) grew up and is featured prominently in the film. © Universal Pictures

Back To The Future II

"You use your hands to play?" Pre-Frodo Elijah Woods as one of the arcade players in BACK TO THE FUTURE PART II (1989). His first screen appearance was in 1988, in a small role in Paula Abdul's music video "Forever Your Girl", directed by David Fincher. © Universal Pictures 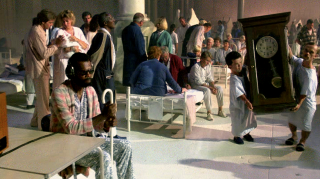 THE EXORCIST III (1990) - There are a few weird cameos in this film, not including the two little people carrying a clock. The 'blind man' in headphones is an unbilled (and overdubbed by another actor) Samuel L. Jackson. © 20th Century Fox

In GOODFELLAS (1990), a very young Michael Imperioli in his fourth ever on screen appearance as luckless (and soon lifeless) Mafia lackey Spider. Imperioli would later co-star on the hit HBO series THE SOPRANO'S. © Warner Bros.

It pays to know the director! Gwyneth Paltrow, Goddaughter of director Steven Spielberg, in one of her earliest film appearances as "Young Wendy" in Steven Spielberg's HOOK (1991) © TriStar Pictures

Sitting on the car on the left is Vincent Vaughn (aka Vince Vaughn) as Jamie O'Hare in his film debut in 1993's RUDY. © TriStar Pictures

An uncredited Renée Zellweger is pouring a funnel for Parker Posey in the second of two very brief big screen debut appearances in DAZED AND CONFUSED (1993). © Gramercy Pictures

In his first ever appearance on film, Tobey Maguire has a very small part as Chuck Bolger in THIS BOYS LIFE (1993). © Warner Bros.

LOST's Daniel Dae Kim plays a very small role as a military sniper in the 1997's THE JACKAL. © Universal Pictures

BONES star Emily Deschanel appears as the receptionist who tells Peter Parker she isn't paying for the late pizza in SPIDER-MAN 2 (2004). © Columbia Pictures