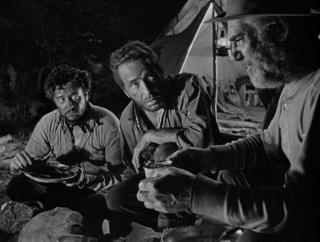 The Treasure of Sierra Madre

Although not a cameo, a relative relation nonethless. In THE TREASURE OF THE SIERRA MADRE (1948), Walter Huston stars as Howard, one of the three gold prospectors. The film was written and directed by his son John Huston, and both would win Oscars: John for Best Director & Screenplay and Walter for Best Supporting Actor. In 1982, the Hustons were the first three generation family of winners when Anjelica Huston won the Oscar for Best Supporting Actress in PRIZZI'S HONOR, a film also directed by her father John. © Warner Bros. 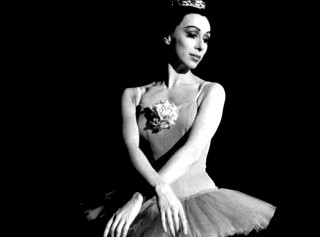 Stanley Kubrick's second movie KILLER'S KISS (1955) has a flashback scene while the female character gives a recap of her formative years to her new friend. The scene consists of a single ballet dancer performing a stage routine. The dancer is Kubrick's then-girlfriend-soon-after-wife Ruth Sobotka. © United Artists 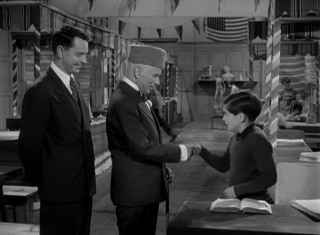 A King in New York

A KING IN NEW YORK is a 1957 British comedy film directed by and starring Charlie Chaplin in his last leading role, which presents a satirical view of certain aspects of United States politics and society. The film was produced in Europe after Chaplin's exile from the US in 1952, but did not open in the United States until 1967. Invited to speak at a progressive school, he meets Rupert Macabee (played by his son Michael Chaplin), editor of the school paper, a ten-year-old historian who gives him a stern anarchist lecture. © Classic Entertainment 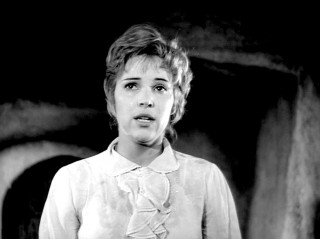 In 1958, while Kubrick was filming PATHS OF GLORY (1958) in Germany, he fell in love with Christiane Harlan and gave her a small role as the frightened singer at the end of the film. She was billed as 'Susanne Christian', possibly to obscure the fact that she was related to Nazi filmmaker Veit Harlan, director of the vile JUD SUSS. They married soon after completing the film and remained together until his death in 1999. © United Artists 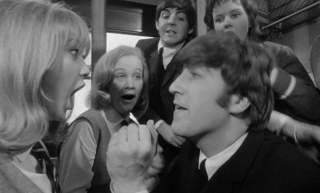 The blond school girl who's a bit shocked to be accosted by a crazed John Lennon is the future Mrs. George Harrison, Patti Boyd. It was on the set of The Beatles 1st film A HARD DAYS NIGHT (1964) that George met Patti and within a year they would be married. Patti appeared in several scenes, including The Beatles performance of "I've Should of Known Better" in the luggage car (check out George keeping his eye on Patti). In this scene, everyone is looking for Paul's "very clean" grandfather. As John and Paul burst in on the girls, John pretends to have escaped the custody of their manager and pleads to Patti: John: "We've broken out! The blessed freedom of it all. Have you got a nail file? These handcuffs are killing me. I was framed. I'm innocent." Paul: Sorry for disturbing you girls. John: I bet you can't guess what I was in for. © Janus Films 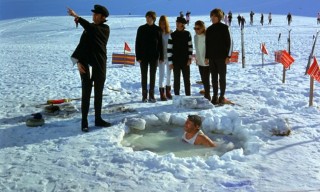 "Excuse me, White Cliffs of Dover?" George Harrison's new wife, Patti Boyd in her second Beatles film, HELP! (1965). George and Patti met on the set of A HARD DAY'S NIGHT and Harrison later wrote "Something" for her. Later, when George's good friend Eric Clapton was pursuing Patti, he wrote "Layla" for her. The song "Wonderful Tonight" was also written for Patti. The ice swimmer is Beatles roadie Mal Evans who later produced songs for Badfinger © United Artists 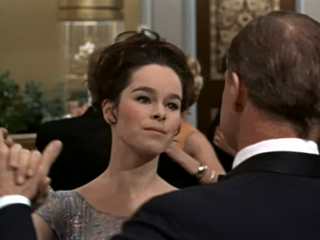 A Countess from Hong Kong

A COUNTESS FROM HONG KONG (1967) was the last film directed by Charlie Chaplin. His daughter Geraldine dances briefly with Marlon Brando © Universal Pictures

Once Upon a Time in the West

From the father of spaghetti westerns, director Sergio Leone's 7 year old daughter Raffaella Leone has some brief screen time at the Flagstone train station in ONCE UPON A TIME IN THE WEST (1968). © Paramount Pictures

Stanley Kubrick's daughter Vivian as "Squirt", Heywood Floyd's daughter in 2001: A SPACE ODYSSEY (1968). One of a few uncredited parts in her father's films, Vivian Kubrick is now a composer/filmmaker. © Metro-Goldwyn-Mayer 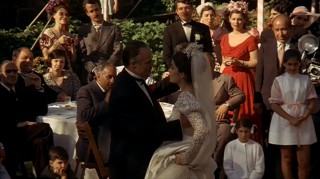 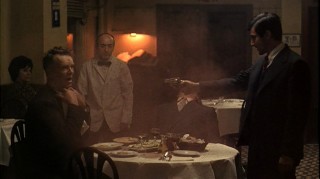 "What kind of film is my son making?" Francis Ford Coppola's mother Italia Coppola is an extra in the restaurant scene when Michael kills Sollozzo and McCluskey in THE GODFATHER (1972). © Paramount Pictures 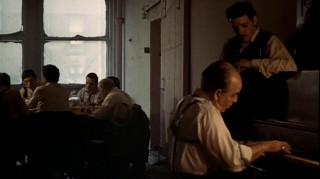 Francis Ford Coppola's father Carmine Coppola playing the piano in the "going to the mattresses" sequence in THE GODFATHER (1972). © Paramount Pictures 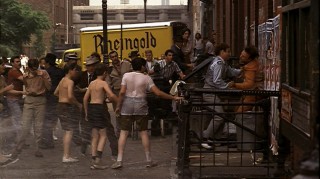 Francis Ford Coppola's sons Roman and Gian-Carlo Coppola are shirtless bystanders in the scene where Sonny beats up Carol Rizzi in THE GODFATHER (1972). © Paramount Pictures 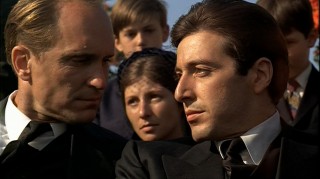 Roman and Gian-Carlo Coppola in their second scene in THE GODFATHER (1972), standing behind Michael and Tom Hagen at Don Corleone's funeral. © Paramount Pictures 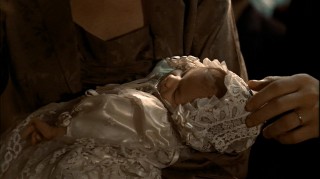 Sophia Coppola as Michael Francis Rizzi in the infamous Baptism scene in her father's film, THE GODFATHER (1972). © Paramount Pictures 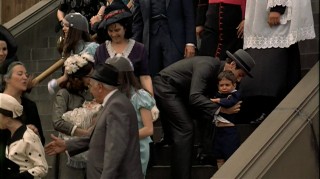 Francis Ford Coppola's mother Italia Coppola (in the purple dress) seems more happy to be an extra at the end of the Baptism scene in THE GODFATHER (1972). © Paramount Pictures 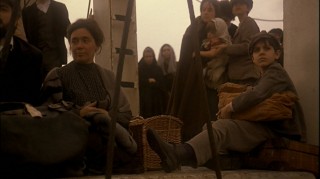 Sofia Coppola is the little girl in the background on the ship with the young Vito Corleone in THE GODFATHER PART II (1974). © Paramount Pictures 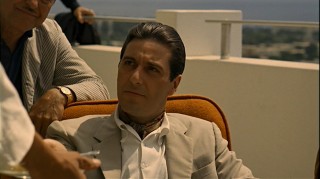 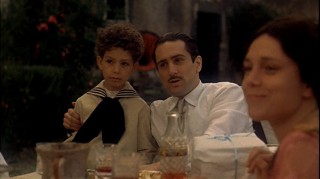 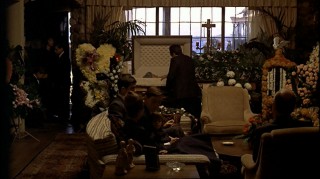 Francis Ford Coppola's mother Italia put on a wig, hopped in the coffin and played the role of Michael Corleone's dead mother for the wide shots in THE GODFATHER PART II (1974). © Paramount Pictures 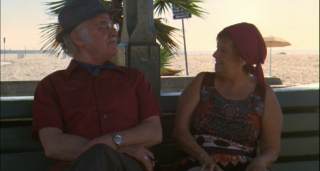 Appearing toward the end of HARRY AND TONTO (1974) as Celia is Sally K. Marr, mother of Lenny Bruce. © 20th Century Fox

The Man Who Would Be King

In THE MAN WHO WOULD BE KING (1975) Sean Connery and his trusty sidekick Michael Caine are on a quest for lost riches. Caine's new wife Shakira Caine played the beautiful Kafir girl that "King Daniel Dravot" demands to marry, against the wishes of the high priest. © Allied Artists Pictures Corporation 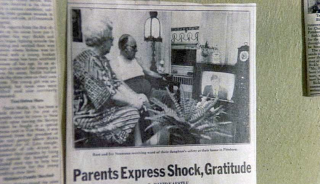 Martin Scorsese's parents Catherine and Charles appear in TAXI DRIVER (1976) briefly at the end of the film in a newspaper clipping as Jodie Foster's grateful parents. © Columbia Pictures 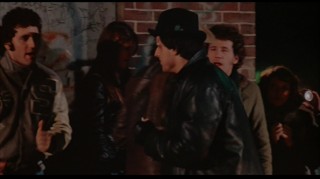 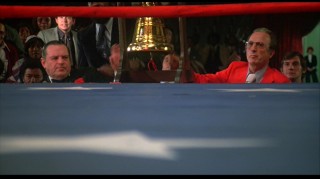 Sylvester Stallone's father Frank Stallone Sr. as the bell ringer in the fight between Rocky and Apollo Creed in ROCKY (1976). © United Artists 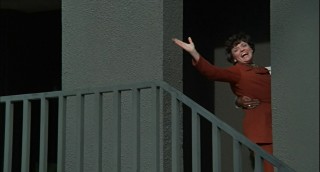 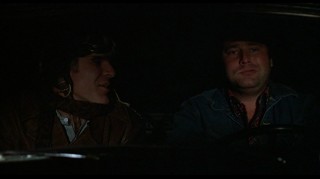 A generous Rob Reiner giving a hitchhiking Steve Martin a ride to the end of the fence in THE JERK (1979). This is the only time Carl Reiner directed his son in a feature film. © Universal Pictures